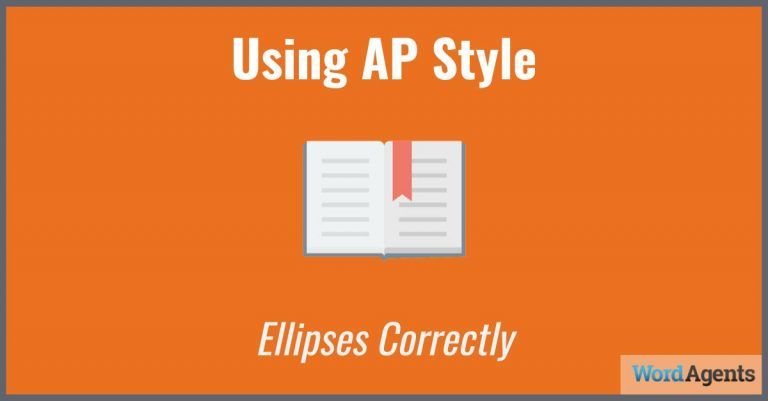 Using ellipses (singular: ellipsis) properly is a matter of correct grammar and presentation. You must consider the usage for the type of writing and how you render them on the page. Like em dashes and parentheses, ellipses are a style element too which means special handling, so they mesh with your work.

You wouldn’t think there would be such fuss about a series of periods. But there is a right and a wrong way to add them which varies by the style you follow. For AP style ellipses, you should use three non-spaced periods with a space both preceding and following them.

There is no variation in the number of periods. It’s always three. You can use an ellipsis at the beginning of a sentence. Treat it like a three-letter word. You should capitalize the first word of the sentence that follows it.

When Do You Use Ellipses?

These style elements like exclamation points serve an editorial function too. You can use an ellipsis to condense your writing to remove irrelevant content, redundant words or those that are understood.

The essential thing to remember is that you should never alter the original meaning of a sentence by shortening it. The middle phrases didn’t add to the main point, so removing them didn’t change the gist of the text.

Sometimes you’ll often see AP style ellipses used deliberately to add meaning or give the text the impression of conversation with the reader. It often appears in other satirical contexts. Using an ellipsis can pack a huge literary punch, so you should use it sparingly for the best effect. Overused, they become garish and trite.

A Special Way to Use Ellipses

In media, you may encounter another use of an ellipsis that is unique to the AP style for entertainment and other informal writing. You’ll see ellipses used as a means to connect several sentences in a single paragraph. It may serve as an introduction to a column piece that will touch on multiple topics.

The best way to use AP style ellipses is by following the guide’s mechanics and usage. Reserve ellipses as an editorial device in formal writing. For informal works, let them add the greatest effect by reserving them for a dramatic moment for the biggest bang for the buck.