Forty or Fourty? Which Is Right? 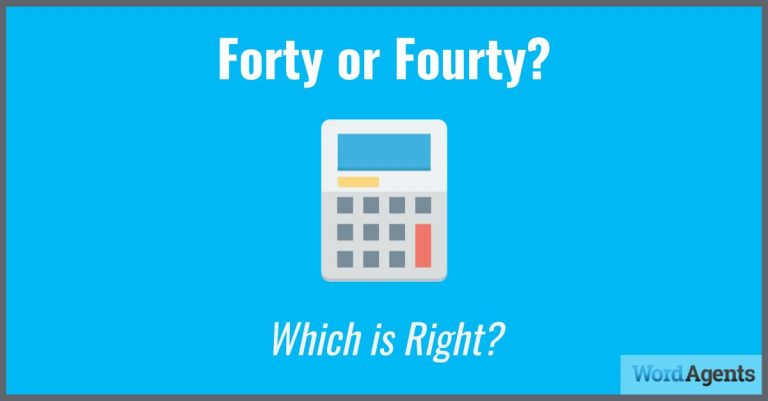 If you’ve made the mistake of writing fourty for forty, join the club. It’s a common error especially since it goes against your intuition of what is the correct spelling. After all, fourteen and fourth have a ‘U,’ so why wouldn’t forty have one too? Your instincts are not far off the course. It’s just that the path took hard left in the evolution of the English language.

Going Back to Its Roots

It’s helpful to trace back its origin to see where things deviated from its initial course to understand the fuss over whether forty or fourty is correct. The word, forty, comes from the Old English words feower for four and tigfor a group of ten to equal feowertig. But that’s not where the story ends, of course. The Middle English word for forty evolved into the word, fourty.

The quandary over forty or fourty rests with the fact that the latter spelling was indeed correct for a time. In the early 1800s, a variation of fourty started to appear more frequently, though the forty spelling started popping up as early as the 16th century. The misspelling still pops up now and again even on popular media sites.

How Forty Lost Its ‘U’

So, forty began its life as an Old English word that became fourty early in its early history. Both the pronunciation and spellings of many words changed, not just the spelling. Several vowel shifts occurred beginning around the 15th century that reflected dialects and accepted ways of speaking and writing. That is where we find the change of spelling that brought us forty.

Its evolution occurred with other similarly spelled words is what was known as the horse–hoarse merger. Other spelling shifts also caused changes in the English language. That is what happened to make fourty become forty as we know today. Literature and expressions of the day also paved the way for forty to become the accepted spelling.

Remembering to Spell It Right

Spelling forty correctly isn’t intuitive. There’s no getting around that fact. It comes down to something you just need to remember. It is, after all, an important number in many areas including several religions, sports and entertainment. And did you know that there are forty squares on the standard Monopoly board?

The accepted spelling of forty today is just one example of the many twists and turns the English language has taken through its history. And it continues to change even now. Who knows? Maybe one day fourty will come back to the forefront again.