Grey or Gray That Is the Question 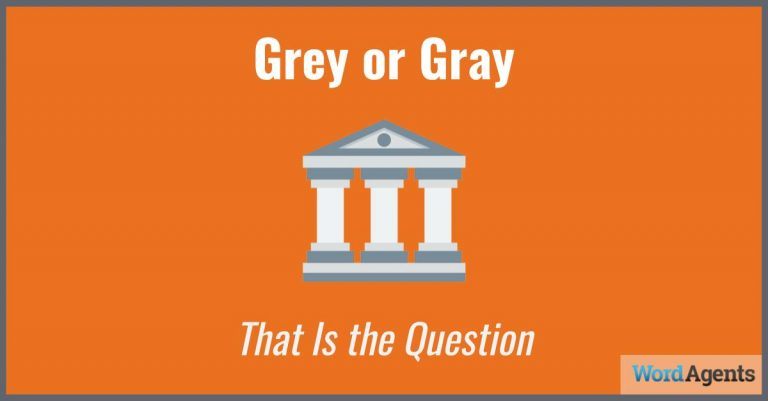 Whether you prefer to use grey or gray is less a question of grammar than what it is appropriate for the content you’re writing. Both spellings are correct. The meanings of the two words are identical despite rumblings to the contrary. They both have the same etymology. However, there are some striking differences between the two words that will influence how you use them.

The Etymology of Grey and Gray

It is helpful to begin with a word’s etymology or origin to understand the usage. Their roots come from the Anglo-Saxon word, graeg, and the related German word, grau. The Anglo-Saxon word might tip you off to the fact that there is a story here, with both the ‘a’ and ‘e’ present. As it turns out, the confusion over grey or gray has a long history too.

Its first use was recorded around 700 AD. The early Middle English varied from “greie” to “greye” as well as other spellings that cropped up in the literature. The spellings of both gray and grey existed too. The lexicographers of the day got involved in the act too. When the dust finally settled, both gray and grey emerged as accepted spellings.

The use of grey or gray today boils down to geographical distinctions. It’s these differences that will help you determine which form you should use in your writing. While it’s technically not incorrect to use them interchangeably, the readers definitely have their own ideas. It behooves a writer to honor those preferences.

Gray in the American English

If you’re an American reading this post, you’ll likely see gray more often than grey. It prevails whether you’re referring to the color as a noun or its use as an adjective or verb. It became the standard spelling in the United States in the twentieth century which deviated from its earlier spelling as grey.

Sometimes you may see references, especially in the home remodeling industry referring to the colors as different. Sorry to disappoint anyone. But gray is grey, and grey is gray.

If you live in Great Britain or a country influenced by it, you’ll likely use grey rather than the spelling, gray. The latter fell out of favor in the 19th century when grey superseded it. You’ll see it used in writings from South Africa, Australia and New Zealand.

When to Use the Right Spelling

The spelling boils down to the preferences of your audience. There isn’t an incorrect spelling. If you’re an American writing content for British readers, you should use grey rather than gray. The reverse is also true. After all, they are the ones that you have to please above all else.