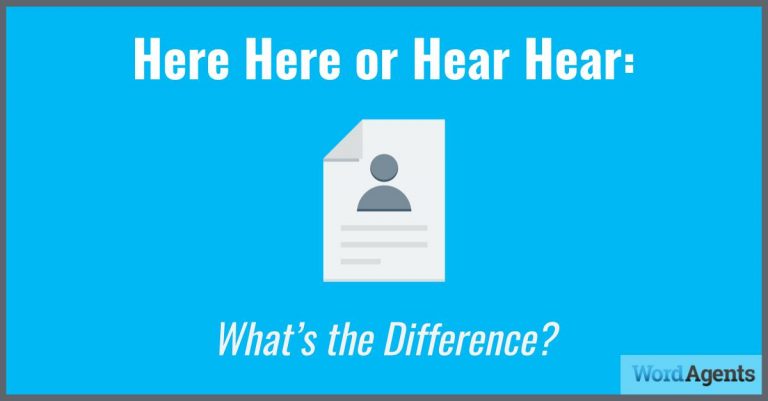 There was a time when the place you’d most likely hear either expression was the British Parliament or the Parliament of the United Kingdom, as it’s more formerly known. Formed in 1707, it is the legislative body of government for the country. It is an institution marked by its adherence to tradition. But you may ask, which is correct, here here or hear hear?

The Tradition of Debate

One of the enduring formalities of the British Parliament are the debates that accompany legislative matters. Some consider the public business of the Houses as high entertainment carried out in regal fashion with all sorts of traditions. The discussions are energetic. House members can decide issues with a voice vote. And then there are the member interactions.

The use of the phrase began as “Hear him! Hear him!” To say that the British Parliament has some odd rules is a bit of an understatement. Members cannot clap because it’s viewed as a form of disturbance. They also cannot address each other by name. Instead, you’ll hear references such as “my right honorable friend” or “the honorable gentleman.”

“Hear him! Hear him!” was and still is a means to encourage someone who is speaking and to suggest agreement with what is being said. Over the years, “Hear him! Hear him!” became “Hear! Hear” with the same effect and intent. Whoever has the floor speaks only to the Speaker. He or she doesn’t acknowledge the chorus of calls, supportive or otherwise.

While it may seem old-fashioned, it’s worth remembering that the British Parliament also forbids certain insults from being thrown around at anyone. They cannot call someone a liar without disciplinary action. If the clapping ban seems odd and out-of-place, there are a lot of classy things that accompany the rules that the institution enforces for which we can overlook it.

What About Here Here?

As you may guess, when it comes down to a choice of here here or hear hear, the former is nothing more than a misspelling. It’s believed that since the phrase was more often heard than read, people didn’t know which spelling was correct. And since here and hear are homophones, the difference blurred over the years. Here, after all, is a more common word than hear.

Despite being incorrect, the use of here here persists in the English language. And hear hear has also branched out into print. It’ll occasionally appear in newspapers and magazines with the same meaning it has on the British Parliament floor. In print, however, its use in the United States leans more toward an exclamation of joy rather than a call to listen to someone speak.

The debate between here here or hear hear is an easy one to resolve. The latter is the correct way to write the phrase with the assumed meaning that it has in the British Parliament. We suppose you could make a case for using here here in different circumstances. But if your intent to get everyone to listen up, stick with hear hear.